Understanding non-human primate variation and population history aids in understanding our own species’ evolution. How does primate population structure vary and what is the impact of hybridization? How do primates adapt to their environments (including diet and disease)? Comparative primate population genetics and genomics, including studies of structural changes, mobile elements, gene expression, and functional analyses, shed light on how natural selection and population demography are involved in the process that lead to differences among primates. This research has historically focused on the human perspective; however, we learn much about ourselves with a focus on diversity in primates as a group.

This study will use ancient DNA techniques to obtain genetic data from the skeletons of twenty-two chimpanzees from Gombe who were early subjects of behavioral research by Dr. Jane Goodall and others. Genetic material will be extracted from tooth roots in the ASU ancient DNA laboratory after morphological documentation. Specifically, we will analyze the chimpanzee mitochondrial genome and genome-wide SNP variation as well as test for simian immunodeficiency virus (SIV) RNA and integrated DNA in order to expand the pedigree of known relationships between individuals at Gombe, assess diversity over time (in both chimpanzees and SIV), and test whether some of these early subjects were infected by SIV. The relevance of research to human origins is that our results can then be used in broader analyses of kin selection, social structure, and mating patterns as well as analyses of the impacts of a disease such as SIV on lifespan in chimpanzees, who are often used as a model for early hominines. This project is funded by The Leakey Foundation and by Strategic Initiative Funds, Office of the President, Arizona State University to the Institute of Human Origins’ DNA and Human Origins at ASU project.

Hybridization and speciation in common and black-tufted marmosets

The recognition of hybridization as an important force in shaping the population histories of human and non-human primates is increasingly gaining anthropological traction. However the full impact of hybridization on primate evolution, particularly among early hominins, remains unclear and highly debatable. The study of non-human primate population histories serve as important analogies for human evolution. The recent release of the marmoset genome has expanded the number of suitable genetic markers for the study of hybridization among Neotropical priamtes. Using these markers, Dr. Joanna Malukiewicz and our laboratory are examining hybridization between closely related New World species, including black-tufted and common marmosets, in terms of ancient gene flow after divergence, and recent genetic introgression within different hybrid zones. The aim of this approach is to gain a better understanding of how past and present hybridization shapes primate population histories. This project was funded by NSF (BCS #1061508), an AAPA early career grant, and a Goldberg Research Grant from the The Nacey Maggioncalda Foundation (to JM). 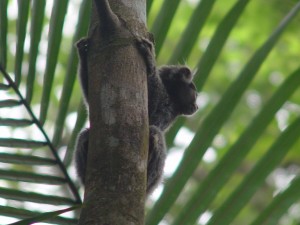